Dining out instead of cooking has become the norm with my family, and why not? There is such a choice of “makan places” (eating out places) in Kuching and at such affordable prices too, that it would be almost unreasonable not to go out for a meal! Recently though, I went out solo to a very special dinner. Imagine a rustic tropical terrace on the Sarawak River’s Water Front, where patrons of Khatulistiwa Restaurant can enjoy Malay food and fresh fruit juices and, in my case, the company two very special men indeed: Borneo writers! Robert Raymer and TomMcLaughlin.
It was Robert who had prompted what was to be a brain-storming meeting of expat writers: both Robert and Tom are American and both have married Borneo girls, while yours truly French enjoys life with a Borneo Teochew man. If you can read French, you can catch my story “Partie à Bornéo”  on my blog. 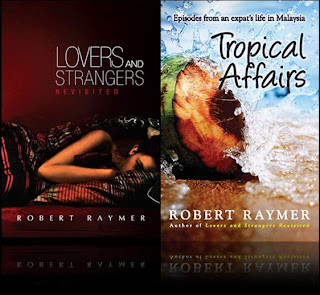 Robert has his own blog: http://www.borneoexpatwriter.blogspot.com/ (you can see him with the croc in his arms.)
Indeed we had much to celebrate since Tom McLaughlin aka Borneo Tom has recently publish his own story and sketch book “BORNEO TOM: Adventures of an Expat in Borneo” about love, travel and jungle family in tropical Asia. Tom, who is a retired teacher, is passionate about conservation and Orang Utans and chooses to use his pen to “raise hell” about certain subjects close to his heart. “BORNEO TOM” is now available at Amazon.com and Kindle. You can also follow and contact Tom through his website http://www.borneotom.com/.

Labels: Artists and Writers in Borneo