FROM A FRENCH FROG THAT LIVES IN BORNEO

TO AN ENGLISH PRINCESS WHO LIVES IN (I assume) ENGLAND

Dear Beatrice,
I am pretty sure that it’s been quite a long time since a frog was last in touch with a princess and I can only guess your surprise. I’d quickly recommend though, that if we ever come to meet, you wouldn’t, in any circumstance, attempt to kiss me. It’s not that we French are most certainly prejudiced against English kisses, but rather because there is no hope that I’ll ever transform into a prince for you see, I happen to be a girl frog.
You may, of course, be wondering what a French frog is doing in such an unlikely place as Borneo, and how on earth she may be able to write in the Queen’s language (or almost!)? May I recommend you look for the answers in my blog (http://www.anotherdayinborneo.blogspot.com/ and http://www.untoitaborneo.blogspot.com/ )
I was not always a frog like I have turned out to be; the incredible transformation only happened when I crossed the borders of my home country and as it is I have retained that innate sense of chic we French are legendary for and that gives me an edge to sometimes comment on other people’s choices of dress or fashion accessories. So let me hop right into the heart of the great world-gossip-press’ tsunami which you recently caused and which reached out the far, far away shores of Borneo: THE Hat!  That’s right, the hat that you wore at your cousin William’s church wedding.
The truth be said right away that I would have never picked THE Hat myself, but only for one reason and that’s because I am French. You, however, an English princess are probably bound by royal duty to wear one of those unbelievable hats on every grand occasion and I can assure you that the French do actually expect you to do so and that they take it that royal hats are as much a symbol of the English Establishment as the quirky black bowler hats are and so irresistibly anglais!
And if I would have ever dreamed of being allowed to wear your royal shoes, I’d also have worn your unique chapeau at the grand happy event of the century which turned out to be one rare occasion when I actually was able to watch something happy on the Great News Channels.                                     So let’s praise THE Hat and its awesome, amusing bow which I’m sure says a lot about you and how tall you stand on your very young years. Indeed when I look at your picture, I see a pretty jewel of the crown that a twist of fate turned into a sore in the short-sighted eye of the grim news Reaper whom you so royally out-smarted when you dropped THE Hat and performed magnificent magic with it ( and this frog does know about magic) for the benefit of children and pinned down the toad-spitting royal watchers with just one wish: "I hope whoever wins the auction has as much fun with the hat as I have,"

Thank you, Beatrice, for bringing out a moment of beauty and humor. 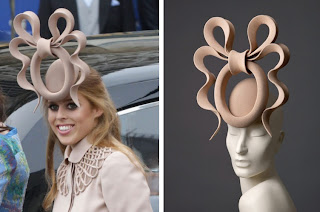 The French frog that lives in Borneo
Posted by Annie R. Teo at 3:21 AM