“Can you offer us a seat for a few minutes? Under the fan if you don’t mind.”
Taking part in an historical event can be absolutely exhausting by 33 degrees C. and 80% humidity on a sunny day. I have been walking with Helen since 8.30 this morning from the Riverbank Suites, all along the Kuching (Pix of RB Suites, Astana) Waterfront, to the end of Gambier road to take pictures of the governor’s Astana (the palace, formerly Rajah Brooke’s Bungalow) and back to the Main Bazaar to finally find a cool shelter at John’s Gallery where my friend Corina works.

Outside the gallery the whole street has been transformed into a long succession of white tents where crafty Sarawakians have gathered here to display their works for three days.

Have you seen the Agong yet?” is Corina’s first question. My husband has been stationed at Hotel Margherita which occupies a prime location on the Sarawak’s river bank where longboats will be racing the whole day. Tonight there will be a parade of small ships which have been entirely decorated with props and lit up in honor of the Agong, the king of Malaysia. His majesty has come to Kuching to chair the Rulers’ Conference which will take place in the new assembly hall to be officially inaugurated today Monday 27th of July 2009 in the presence of all 13 state leaders, the Prime Minister of Malaysia with the Chief Minister of Sarawak and all the dignitaries. The Dun, as it is known can be reached by boat or sampan or the longer way, by road. It now stands gigantic between the Astana and Fort Margherita.
The fort was built in 1879 as a military defense for Kuching, 130 years later the Dun stands to safeguard Sarawak’s principles.

Corina gives me a disappointed look: I haven’t met the Agong. He is staying with his suite in another hotel. Finding which hotel would be an easy task: look for the hotel with a large Red Crescent ambulance(the alter ego of a Red Cross ambulance) parked right in front. The paramedics follow him everywhere; it’s protocol.

I am starting to feel better; Helen is in deep conversation with Corina; something to do with healing techniques, Corina’s dad is a renowned Kung Fu master and a healer, Helen is a therapist.


5pm. Nowadays, tourists and nostalgic residents like me or simply art and craft lovers come to the Bazaar, while a little further, past the old Court House, Gambier road still thrives selling textiles, spices and the odd miraculous ointments made of snake parts or Gambier. If you are looking for a lucky stone to wear on as a talisman, that’s where you should go to.
John’s Gallery does not deal in small knick knack souvenirs like most of its neighbors. John Tan’s interest is in old jars, impressive wood carvings and statues, gongs, native parangs and Malay Krises. I love browsing here. I take a few shots at Corina and Helen then I notice the old safe. I wonder if it contains the weekend's earnings? I won’t even ask; my loot is what I store inside my camera, so I just take the whole mysterious old safe into my memory card, with a click.


Helen wants to leave; she has appointments, back at the beauty parlor. Corina grumbles that she has to work while it should be her day off. She must keep the tourists happy and John’s business going. I am the lucky one; I am totally free to go where ever I please with my camera. I wish Corina a nice day “all the same” and remind Helen that the floats are due to start right in front of the hotel terrace tonight at 8 o’clock.

On the Sarawak River, teams are competing in a special regatta in honor of the honorable guests; the annual event will take place later,during the weekend. While the VIP's tent is slowly filling up, I walk along the bank,
watching, listening, enjoying and clicking to capture the amazing colors and the moods. I notice many people are wearing hats, many of them “same-same but different”; an amusing theme comes to my mind: “The many hats of Sarawak”. There’s the Malay songkok,dark blue or black, rigid and velvety or made of a more casual cloth and embroidered; there are the indigenous hats, all made from vegetal fiber. Their different shapes indicate a different ethnic group; there are the ladies' elaborate head-gears too and I even find a chef wearing what the French call toque, a chef’s hat! 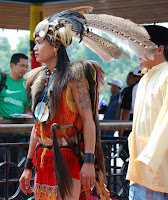 It’s high noon and all the tables are occupied. I find Ramsay and Edric Ong who is actually wearing an Iban hat! I immortalize him of course. The cousins are taking a break before joining the VIPs. Both own a gallery/shop (Outrageously Ramsay Ong – EON Company) on the Bazaar and both are actively involved in promoting the arts of Sarawak.
I have been walking for hours now and I am happy to find a spot to seat on a parapet under a large leafy tree and next to an English lady. She is in Kuching with a friend who seems to have disappeared in one of the shops. She is leaving tomorrow and right now she is fully taken by what’s going on around her, all the people even the very old and the children. There could be chaos yet there is only good humor, there could be heavy security, there are only jovial and helpful uniformed men. It's true, it’s the people who make the event. The English lady comments that she feels so overwhelmed yet perfectly safe. I wish her “Bon Voyage” and continue on my way back to the hotel for a break, never having enough of taking pictures of people and racers, everyone always greeting me with a hand wave or with a smile. Tonight I’ll meet Helen again, it’s going to be a splendid show of “Sarawak Boleh” (Sarawak can do it), there will be fireworks and mee mamak (noodles Malay style) at James Brooke’s Café will taste better than ever.


See you next year at the Regatta! 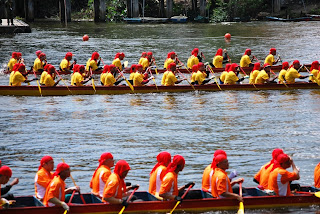 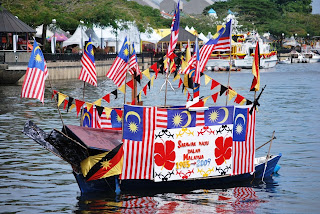