CROCODILES OF BORNEO: WHAT ABOUT THEM?

I have never been a fan of crocodiles except perhaps in the case of cartoon character Wally Gator and Captain Hook’s nemesis, tic, toc, tic, toc….
I must also confess that despite my sincere commitment to the protection of animal species, I am simply unable to feel for crocodiles.
My long time friend Johnson Jong feel differently. He created and developed Jong’s Crocodile Farm, which is half way between Kuching and Serian, and has devoted most of his life to breeding crocodiles and their narrow snouted cousins, the gavials (or gharials) and occasionally hunting some rogue man-eaters.

What's lucking beneath? A gavial!

Johnson does not scare easily, even an old croc would agree with that. I have seen him creep along the mucky banks of his huge breeding pond to investigate nests and check out the eggs temperature and how close they were to hatching, then run for his life and jump onto rather precarious looking wooden platform with an angry croc mum rushing after him at an amazing speed for its size and weight. I remember Johnson almost lost one calf once and he still reckons that one day he’ll end up, Hook’s style, with only his Rolex as proof of his demise, ticking deep inside the stomach of one of his boarders. For those of you, readers, who would be tempted to imagine a croc licking its whiskers with its tongue after such a yummy meal, STOP right here! Crocodiles do not have a tongue and they have no whiskers either. Really.

Crocodiles are archosaurs, in other words, they are the living fossils of the dinosaurs’ age. If you ever happen to face a fifteen or twenty years old crocodylus, and I hope for your sake that it will be through a fence, the large grey armored scales and the huge predatory teeth that awkwardly stick out of the lower jaw will leave you no doubt on their pre-historical origin. They feed on fish and relatively large mammals; that means us, humans, too.

Johnson’s involvement with crocodiles is not “just” business but one of the most exciting, griping strands of passion anyone can fall subject to. My husband once recalled out loud some hair rising memories of crocs encounters, while on his native river in the Saribas region, only to hear Johnson beg him to please, "please!", organise a night trip aboard a shallow longboat, where Ian’s part would be to hold the torch light so as to catch the reptilian eyes above water level. I am not a widow yet; that tells you that, luckily, the trip never materialised.

One of the most spectacular hunts that ever took place here happened in the 1990s when Johnson helped a group of villagers from the Batang Lupar river, catch the elusive and gigantic Bujang Senang (the cool bachelor) which turned out to be a female. To say the least the beast was a monster with an unusual white stripe running the whole length of its back. The six meters long Bujang had imposed a long reign of terror and sorrow over the riverine dwellers: it had taken a number of their children. The local daily had published a photo of the great catch lying at the feet of a long line victorious looking people who seem to have no qualms whatsoever about the kill they had just made and why should they really? 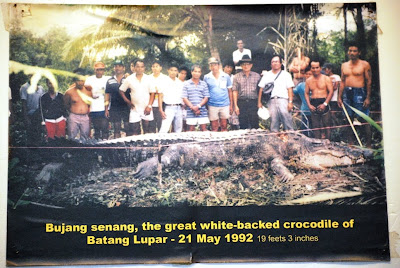 Indeed it brought closure to the bereaved families who in turn gave respect to the spirit in the beast. As it was, not long after the hunt, an Iban football fan who happened to be driving from his remote village on his way to watch a crucial match in Kuching, stopped to pick up a young man in need of a lift, thinking it would be good company on the long drive and of course they talked about football. The young man then said he could tell which team would win and by how many goals. “Trust me “he said to the driver as he asked to be dropped on the Batang Lupar bridge. When the driver looked in his reflector, the young man was gone, but where? On that night the predictions came true, and of course the man told everyone who would care to listen to him, which came to a considerable number. By the time the press caught hold of the story, the driver had become absolutely convinced that he had given a lift to the spirit of Bujang Senang itself. From that very day the state football team of Sarawak adopted the name “Bujang Senang” while thousands of supporters hailed the giant croc’s name at every match. Long live the legend of Bujang Senang!

Most people here do believe in spirits and that these spirits dwell in nature and often inside the bodies of animals. They can just as well ruin our life and even kill us or bring us luck. My friend Sek Hua who has a real gift for seeing the bright side of life, firmly believes that crocodiles bring luck too, at least in exceptional and highly unusual circumstances. He should know, after all he may be the only man on the planet to have been caught in a shower straight out of a croc’s bladder (he said it felt hot), the day he helped Johnson carry the rear end of a half sedated and muzzled adult reptile that needed to be shifted to a larger pond. It got to be luck!

Recently as I was spending quality time reading Tropical Affairs (Episodes from an expat life in Malaysia) I found out that Robert Raymer, the author (for pix see http://borneoexpatwriter.blogspot.com/2009/10/blog-post.html) ) had actually once held a live crocodile during a photo shoot on the set of a movie where he worked as an extra. My most daring deeds in front of a camera have been with a bear- cat (Artictis Binturun), an adult (and recently fed) python and a grass spider (I meant to fight an old phobia). No, I really don’t have any love for crocs and I’d gladly leave their handling to Johnson, Robert and Sek Hua; yet I must confess that despite my fear and dislike towards the beasts, I always have a splendid time with tourists, as I tell them how the spirit of Bujang Senang supports the state football team and how one day, one old French lady had somehow escaped my supervision and simply gone for a cool swim in the Batang Lupar at the very hour when crocs were lurking looking for food and how they all parted respectfully to give her way, because you see, the old lady happened to be grand ma’ Lacoste. 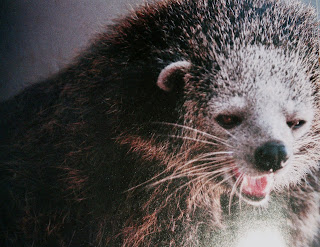