FOOTLOOSE IN THE DESERT 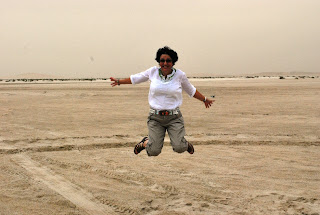 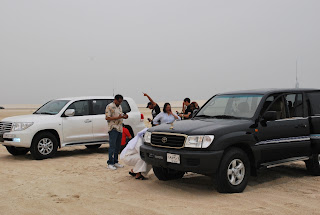 
Saeeda explains that she guides during weekends and that she is still a trainee. She tells us that while all her friends are already married with children, she’d rather take her time, not like her mum who is only forty two years old. She takes out her mobile phone to show us a portrait of herself with her mum; she won’t allow Jassim to look. Striking! Both look like sexy performers with extreme make up on and eyes as outstanding as on ancient Egyptian paintings! I’m having a hard time re-conciliating this picture with plain dark Jane on the front seat; I mean Saeeda. For a second I realize that with my more liberal upbringing, I have never had a chance to share that kind of silly fun with my own mother as these two women seem to be enjoying on the photograph. 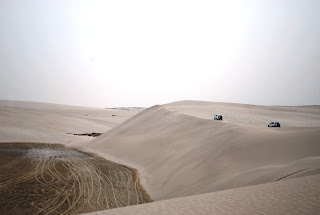 Ahead of us we watch the other vehicles perform what looks like some extreme ballet dance; it gives us a preview of what we are going to go through ourselves in a few seconds. Adrenaline is pumping like never before; voices and laughter are filling up the car and through all this and above it all, I can hear Shakirah singing through the blaring stereo. 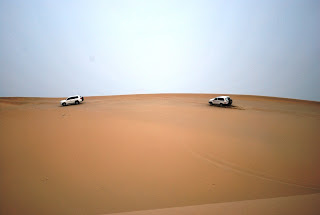 For more than an hour now, we’ve been going like a bunch of mad people thrown together inside a shaker bottle, yelling at the top of our voices; yet and through it all I am still trying to take pictures of this “once in a life time” experience while my camera stubbornly refuses to take most shots: we are in the desert and there is nothing to focus on!
Next to me Doctor Saad is making serious comments on the safety equipment or, should I say, the lack of it. Sure we have fastened our safety belts; with no helmets to wear, aside from prayer, that’s all we can rely upon.  The good doctor has to stop worrying out loud though as Saeeda reminds him that here in the desert, it is very bad luck to talk about accidents. She reassures us that Jassim has been an apprentice dune safari driver for six years now; this should imply that he is not a professional yet, but I don’t let it worry me; this is not a time for worrying; I came to be thrilled and I am getting every bit what I wished for. Soon however, all cars have to stop at the foot of a very high and long dune to fix a punctured tire.  Passengers, including my friend TP and me, seize the opportunity to take their distances from the vehicles and attempt a climb. So far the sky has been overcast with drizzling intervals (a rare thing!) so the sand is just pleasantly warm and oh so fine! Dragging our feet up and forward though is tough sport with sand running from underneath our soles. While our feet we keep sinking, we move forward one step and slide two or even three backwards. This is so much fun! And to think that this sea of sand used to be under water!

During our stop we found a few sea-shells that left us dreaming of what it would have been like tens of thousands of years ago; soon we realize that the sea actually still nearby, now an inland sea that separates Qatar from Saudi Arabia. As we jest about taking a swim across, Jassim points out that the waters are very deep (some 200 meters) and that the Saudi side is guarded with armed posts. 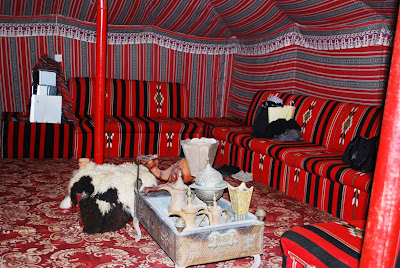 Saeeda calls us inside, she wants us to wear the traditional long black dress and cover our heads so that we can have our photo taken together as three friends. We happily oblige although when I see myself on the photo, I know that this style simply does not suit me. I look dreadful! TP looks quite elegant though.                    As TP and I remove our Qatari dresses, so does Saeeda in front of one of the men, incidentally the one who’s just taken the few photo shots, who is still standing there watching us and laughing, obviously enjoying the rare intimacy. We think Saeeda has forgotten his presence, but as we gently bring this to her attention, she laughs with her contagious laughter: “It’s ok, he’s my boy friend!”  And of course it’s o.k with us if Mohammad stands there with loving eyes, discovering Saeeda’s jeans and tunic.

Outside the tent, aromas of kofta and curries attract everyone to the buffet table. It doesn’t take long till French, Canadian and Japanese tourists, some with young children, all agree that tonight’s dinner is out of this world under the perfectly clear sky that offers us a glimpse into infinity.