The first thing I notice as I take my seat in the car is the falcon helmet that hangs from the reflector. Falcon breeding and hunting with them is a national sport in Qatar. These wonderful birds can cost thousands; there are even clinics caring specifically for them, fully staffed with falcon doctors.

Our driver, like most of the working population here is not from Qatar; Suria is Nepalese and he’s been in Doha quite a number of years.
Alkhor is the 2nd city in Qatar, yet what we find is a small fishing village where all the fish consumed in the country comes from. Previously, that is before petroleum became black gold, fishing and pearl diving were the sole industries. Records of fishing trade go back to the 5th and 4th millenniums BC ; on our way to Alkhor we stopped to see stone carvings made by ancient fishermen probably while waiting for their ship to sail. Nets have made divers redundant while pearl fishing is no longer allowed. Qatari pearls used to be the most precious in the world; now petroleum fetches the big bucks. Divers and fishermen have deserted most of the villages between Doha and Alkhor; they moved to the capital city where they can enjoy big houses with big air conditioners. 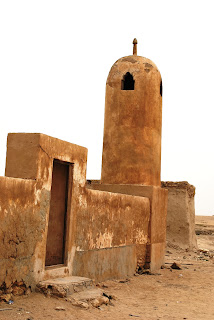 Opposite the port, I’m surprised to find a mangrove forest; Suria is sad to tell us how most of it has already been removed and how people like to drive here to see and smell the mangrove.

The fort of Zabara is a pleasant stop. It was built in 1958 as a watch point and now serves as a tourists’ stop.