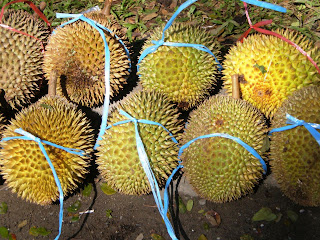 December’s back and here I am, on a regular thirty something degrees Celsius pre-Christmas day, standing in my neighbor’s chilli-pepper field. I am here specifically to shoot a Durio zibethinus (a Durian tree) with my camera and collect a new picture for this blog. Standing near me and my tripod is Ah Chai, the chilli-peppers grower; he is frankly disappointed with the scarce number of oblong golden fruits which we can see, hanging from the huge tree ahead of us. “This season is not good” he laments. As I recall, the previous one, half a year ago, was not any better; climate changes?

I seldom have the opportunity to talk to my neighbours; they are all farmers and our family is of the urban kind, “wanna be” hobby farmers. We commute in and out of the small country drive, we wave, we give way to motorcyclists, sometimes to a van, yet we rarely stop. The only friendship we have developed is with Ah Peck, which by the way is not his name, it really means “grand-father” or “old man” in local Chinese. We don’t know his real name; he’s never told us and he seems to enjoy us calling him Ah Peck.
It was easy to for us to become good neighbours because he and his family are the only planters who actually live on their land; the others are daily farmers.      Today happens to be a busy field day for most of them, a fortunate coincidence, and a chance for me to finally meet them on my walk to that large durian tree down the drive where Ah Chai, and by now three other men, have gathered around my strategic photo-shoot spot. Right now, with them by my side, I can witness the legendary and amazing power of the durian: the power to attract and unite people. This is exactly what is happening here, in the midst of chilli-pepper plants for two Hakka and one Bidayuh men and I, a French woman.

The powerful spell of the durian spreads through South East Asia, Indonesia, the Philippines, southern Thailand and Malaysia. No other fruit I know of can get people together to enjoy a splendid time like this one does. I mean, no-one would ever fuss so much over a pineapple, a bunch of bananas or even a jack fruit.
Despite its thorny nature (“duri” in Malay means “thorn”) the durian actually creates bonds, at least between locals. As a general rule though, sharing a durian with a non-Asian without any prior briefing may result in the end of a beautiful friendship. Although there seems to be a growing number of Caucasians who claim to love the custard-like pulp that covers the large seeds encased in the inner compartments of the spiky shell, even for those, it is still an acquired taste; most of them react by running off, literally, or like my friend Elsa did, by diving head first into a river.
As controversial as a durian can sometimes proved to be, and as much as it can test East meets West friendships to the brink, here in Sarawak, as everywhere else in the region, it is, truly, a diplomatic fruit which has been unanimously crowned KING of FRUITS, by both genders of all ethnic groups and regardless of their religious faith. Call a few friends to join a durian hunt all the way to some remote kampong (village) and you will find yourself leading a caravan!


Durians are good business too, and many shrewd farmers set up makeshift stalls on the roadside, the ultimate temptation for drivers to make an impromptu stop and start a “durian ritual”: pick a few fruits, sniff them like a French would a truffle, shake them like a maracas, close to the ear to listen to the dull, subtle knocks that tell the tale of a ripe to perfection durian. Buyers even like to exchange savvy comments with total strangers on how to pick the best fruit (yet not before they have finished picking their own) and finally negotiate the price with the seller. 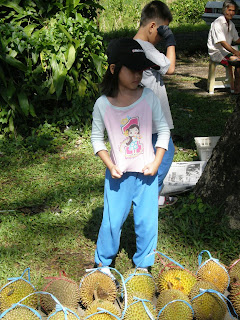 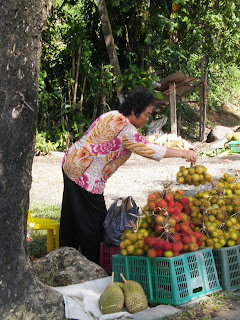 Except for its look, I used to hate everything about the durian, its taste and its odour; then without me even knowing, my nose, first, got used to it, and what I had first perceived as a revolting stench, I now identify as a familiar call to get together with friends and have fun sharing a fruit I have grown to actually enjoy! Mind you I do have a preference for the orangey pulp rather than the whitish one. I am picky.

The durian happens to be particularly nourishing; it is loaded with vitamins and minerals, a real bonus to animals and for this reason humans actually have to seriously compete to get to it first while it is still on the branch. I remember an Iban legend that tells the story of an unfortunate young woman who had been abducted by a randy Orang-Utan and owed the success of her escape only to the fact that the big ape had let himself be distracted by the sight of a few durians that had fallen to the ground, long enough to give his sweet heart enough time to run to her rescuers’ long boat.

The KING of FRUITs does come with some dangers though. Although it never seems to drop onto the heads of those patient fellows who spend whole nights waiting for their prize to fall from the branch (they’ll tell you it just never, ever happens.), it does have bad chemistry with alcohol. 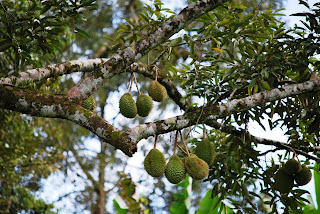 Yes, it’s almost Christmas; back on the French Riviera, my brother and the whole family are probably feasting on tiny and cute looking, irresistibly flagrant Corsican Clementines (a winter fruit), while I am ready to bet with my husband that the almost 30 centimetres long, 15 centimetres in diameter and well above 2.5 kilos orangey durian that dropped last night, from one of our trees, is going to taste like the perfect KING of FRUITS, and tomorrow morning, I’ll walk down the drive again, to talk about it with Ah Chai and may be with a few other neighbours too.

Have a splendid festive season!

P.S: To Raeleen, “thank you” and I hope I will have to say it again many times in future. 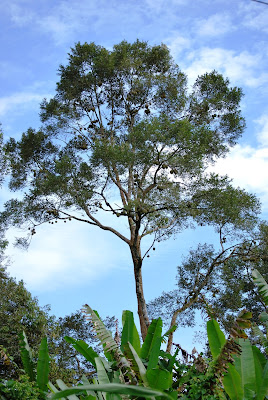 Some useful information was gathered from “Durian - How to Choose and Open a Durian” from Dennis Sim, former About.com Guide http://southeastasianfood.about.com/od/malaysianfruits/ss/ChooseOpDurian_9.htm 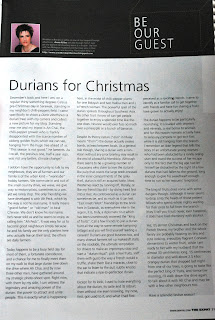 As published in THE EXPAT magazine - Dec 2010 issue 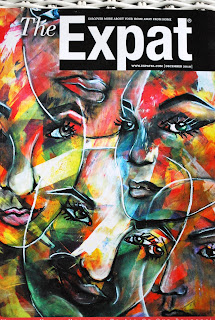