A tribute to Reynolds Gregory


A couple of years ago Ian and I received an invitation to our friend Jennifer Lau’s daughter’s wedding. We were really thrilled, first because Jennifer and Daf, the Irish love of her life, are dear friends of ours, and also because we had enjoyed the kampong engagement party so much. As the date drew closer, Jennifer, who is a professional radio announcer and DJ briefed me on the latest news: “The Elvises have offered to perform for us; they are such good old friends of mine!”
I have to confess that the news concerned me a little. I am one of those who simply dread impersonators of famous stars, to the exception that is, of a few comedians. By the time we reached the city hotel where the dinner was to take place, I had “psyched” myself to bare the program with stoicism. Thankfully I became quickly distracted as soon as we met with a number of long lost acquaintances and dear friends. It was one of those multi-racial occasions Malaysians love, Chinese on the bride’s side and Bidayuh on the grooms side. We happened to be on the bride’s side, like Dutchman Jacob with Mina, his better half from the Kelabit highlands and Colin who wore full Campbell tartan to tango his darling shanghainese wife. It is amazing how the human ear can analyse and identify elements of conversation coming in with a whole range of accentuated English like Chinglish, Deutchglish, Dayakglish, Irish, Scottish and Franglish. Then, came the Elvises.

They each looked a million dollars in their made in Memphis Tennessee stage costumes; they also sang like legitimate kings. Those two kings of the night were Reynolds Gregory and Wilfred Vincent Ragam, they were cool, and they were professional. As much as I had dreaded the show, I ended up loving every minute of it and promising myself and Ian to save every ringgit to be able to have them perform during my brother’s next visit.

Sadly I found out in this Monday’s news paper that Reynolds had collapsed on stage during a Saturday night performance in front of 300 dinners and fans. “Can’t Help Falling in Love” was his last tribute to the King of Rock and Roll, he died with a melody on his lips. May all the King’s men go on with the show. 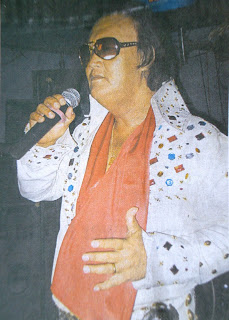